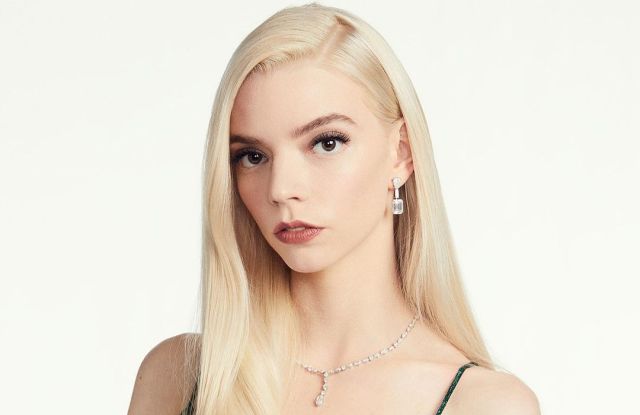 Everyone misses that part of it; everyone misses the red carpet, the gowns, and the jewelry,” said stylist Law Roach to Vogue on Anya Taylor-Joy’s look for the digital Golden Globes this week.

Since we all are starving for the escape of glamour, Roach seemingly determined to bring it back with this production.

The top of the dress takes from a silhouette in the autumn/winter 2018 Dior collection. The Lurex gown that featured a draped bust and sheath, a scooped back, and delicate straps along with the statement cape reportedly took 300 hours to make. It aimed to evoke ’70s Hollywood glamour.

The color didn’t only exude luxury but also had significance to Taylor-Joy. She wrote to Vogue, “I’m literally obsessed with the entire look and am so grateful for it. It made me feel powerful, and I really loved the fact that it was green, because the color was important to Beth, Emma, and myself,” referring to her characters in “The Queen’s Gambit” and “Emma.”

For the awards ceremony, Taylor-Joy wore jewelry from Tiffany & Co. She had on a necklace of over 70 diamonds, a diamond ring, and earrings featuring emerald-cut diamonds of over 7 carats each. The earrings alone are worth over $1.5 million.

Hair and makeup gave the same attention to detail and added to the overall story of the look. Hairstylist Gregory Russell said, “I created a 1970s Jerry Hall–inspired hairstyle, given the length of Anya’s hair and the lines of the dress.” It also reminded people of 1940s star Veronica Lake.

Russell does the ’dos of many celebrities including Kate Hudson, Chloe Grace Moretz and Zoey Deutch. His hair brands of choice are vegan color care line Pureology and GHD, which is known for its professional-level hot hair tools.

Celebrity makeup artist Georgie Eisdell gave the full lowdown on the makeup to The Zoe Report. “I went with a bronzed smoky eye, beautiful lashes, glowing skin and a nude Rouge Dior lip to keep it modern and young.”

On Taylor-Joy’s eyes, Dior 5 Couleurs Couture #599 New Look palette was used, with Eisdell mixing the light and deep bronze and adding depth with the dark brown. “For her lashes, I added layers of the Diorshow Iconic Overcurl #090 Black,” said Eisdell. Her process also involved adding individual lashes for more drama.

It’s time to get serious about hand care

Makeup and mold: How to keep the fuzzies away