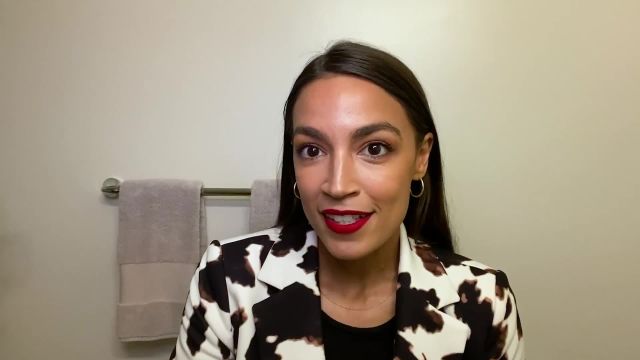 Congresswoman Alexandria Ocasio-Cortez impacts the lives of people beyond the 14th district of New York. As the youngest woman to be ever elected in US Congress history, and of Latinx descent, she represents that big changes are coming.

She’s not scared to the on the systems in place to fight for women’s and LGBTQIA rights. She’s also can’t be beaten for her smart wit and social media sense. At 30-years-old, Ocasio-Cortez just gets it.

She recently was featured in Vogue’s “Beauty Secrets” series. Here, she dropped some major quotes. Something to repeat in the mirror as you do your skincare and beat your face.

“First of all, femininity has power.”

“Just being a woman is quite politicized here in Washington.”

“There’s this really false idea that if you care about makeup, or if you’re interests are in beauty and fashion, that that’s somehow frivolous. But I actually think these are some of the most substantive decisions that we make, and we make them every morning.”

“If you are at all a melanated woman, it’s really hard to find sunscreen.”

“I love beauty, but also I try not to have a full beat every day.”

“One of the things that I had realized is that when you’re always kind of running around, sometimes, the best way to really put together is a bold lip.”

“I will wear a red lip when I want confidence; when I need a boost of confidence.”

“Our culture is so predicated on diminishing women, right? And kind of preying on our self-esteem. So it’s quite a radical, my opinion, it’s quite a radical act, and it’s almost like a mini-protest to love yourself in a society that’s always trying to tell you you’re not the right weight, you’re not the right color…whatever it is. When you stand up, and you say, ‘You know what? You don’t make that decision. I make that decision’, it’s very powerful.”

“I went from working in a restaurant to being on cable news all the time.”

“At a certain point, I just learned that you cannot get your feelings of beauty and confidence from anyone but yourself. That’s is one of the most ultimate gifts that you have to give to yourself.”

“If waking up in the morning and doing your makeup gives you life, then that is amazing, and you should do it. But what we’re also saying all too often is that women who wear makeup…also make more money. And so at that point, these calculations and decisions, stop being about choice. And they start being about patriarchy; where if we look attractive to men, then we will be compensated more. That, to me, is the complete antithesis of what beauty should be about. I think beauty should be about the person applying it.”

“We live in systems that were largely built for the convenience of men, in oftentimes were designed with the subjugation of women and queer people in mind. When you make a decision for you; when you’re like ‘You know what, I’m going to do this, I’m not going to do this thing that is expected of me because if it’s expected of me just because it’s been the norm: Who has been the norm been serving?’”

“The way that they [queer community] has been using beauty as a form of self-expression from drag queens to non-binary people…is a lesson to everybody.”

“If you need a little boost, or if you’re feeling particularly challenged that day, look in the mirror and say ‘I’m the bomb and I will make the world a better place in my own little pocket because that’s what I’m here to do.’”

What are the best beauty podcasts out there?

« LIST: Where to get the best e-learning courses on fashion, design, and beauty

Discovering the magic of hyaluronic acid »

Album Review: ‘What’s Your Pleasure?’ by Jessie Ware is a disco delight