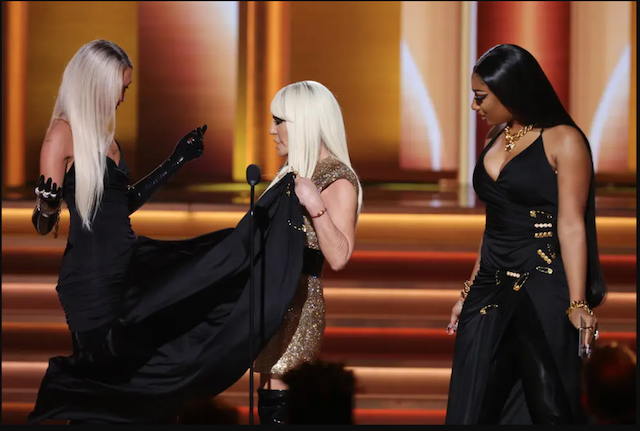 The 64th Grammy Awards, music’s biggest ceremony, followed up our Oscars high from last week. The show started with some red carpet fashion moments and all throughout the parade of presenters, winners, and performers, we were eyeing all the outfits.

One particular gag stood out starring Dua Lipa, Megan Thee Stallion, and Donatella Versace. The singer and the rapper duo behind “Sweetest Pie” pulled a joke that Whitney Houston and Mariah Carey did at the 1998 Grammy Awards.

In matching ensembles, Dua and Megan got a quick dress change from Donatella Versace after their staged spat.

Looks like any outfit problem can be solved as long as Donatella has got your back.

The 64th Grammy Awards saw an array of music’s best, like Doja Cat, Billie Eilish, Justin Bieber, and BTS, all come together at the MGM Grand Garden Arena in Las Vegas. Big winners include Olivia Rodrigo, Jazmine Sullivan, HER, and Tyler, The Creator.