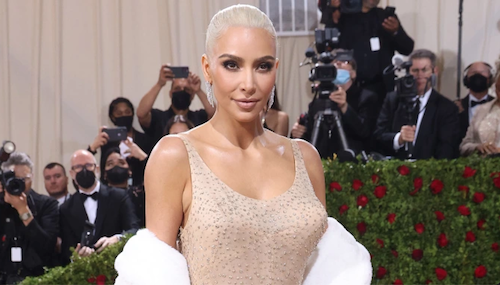 There will always be the one look from every MET Gala that will be talked about, much meme-d, and eventually referenced for future galas. In 2015, it was Rihanna’s massive yellow Guo Pei number. In 2019, it was Lady Gaga’s four looks in one performance as she walked up the stairs.

In celebration of this year’s theme, “Guilded Glamour,” Kardashian’s dress didn’t just bring in the sparkle. It was also about the fascination and fantasy surrounding the dress Marilyn wore on the day she sang Happy Birthday to Presiden John F. Kennedy in 1962.

By today’s standards, the sparkly naked dress adorned with thousands of crystals is conservative. However, the dress carries a reputation and has transformed a sort of mythology around it. Monroe sparked rumors that she had an affair with Kennedy in this dress. It is not the most expensive dress to be sold at auction. in 1999, it went for a million dollars as Christie’s foresaw part of a sale of Monroe’s estate. In 2016, it commanded $4.8 million at Julien’s Auctions.

Kardashian borrowed the piece from Ripley’s Believe It Or Not. Given the dress value and fragility, Kardashian only fitted the dress once before going on a strict diet so she could fit into it. She said Vogue, “I would wear a sauna suit twice a day, run on the treadmill, completely cut out all sugar and all carbs, and just eat the cleanest veggies and protein. I didn’t starve myself, but I was so strict.”

At the MET Gala, she changed into it in a special room before heading up the stairs. At the top of the stairs, Kardashian switched out into a replica of the dress. Kardashian shared, “I’m extremely respectful to the dress and what it means to American history. I would never want to sit in it or eat in it or have any risk of any damage to it and I won’t be wearing the kind of body makeup I usually do.”

« Did this makeup company catch Amber Heard in a lie?

The perfect sparkle for your “Euphoria” inspired looks »